My Girlfriend reminded me that she really likes my lampshades - so I thought I'd do a quick blog about them. 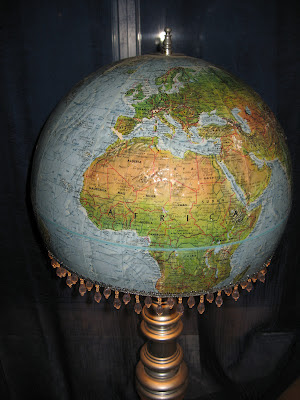 Years ago, I saw a home improvement show that used a globe as a lampshade - and I LOVED it!!  I thought "I can do that!".  I had seen many old globes at places like The Salvation Army and Goodwill that I thought it would be a quick and easy thing to do.

So off I traipsed to find a few globes.   I had never realized the variety of sizes and colors of globes that were available.  It took me a while to find a couple that I liked the color, that the size were big enough to fit my lamps but not too big, and that were not made of plastic or other odd materials. 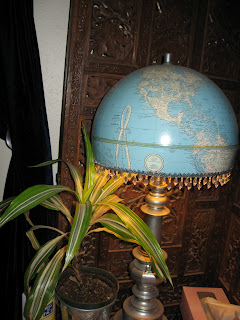 Finally I found a couple of lovely paper-based lampshades.  First removed all the globe hardware (like the base the globes stood on, and the hardware holding it on the stand).  Then I used a box-knife to slice through the globes.  That was MUCH tougher than I thought it would be - let me congratulate the manufacturers for their extremely well-made paper-based globes!  It took quite a while to cut the bottom of the globes off neatly.  Once I had removed the bottom of the globes, I found some special edging and beading to place along the bottom/cut edge - that gave the globe/lampshades a really nice-looking finished edge.  I even re-used some of the hardware from the globes as additional details on the lampshades.

I put my newly-made globe lampshades on my lamps, and ... ta-da.....  what nifty lamps and lampshades!!! 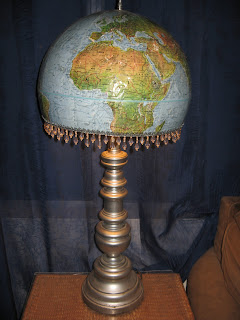 I have these two lamps in my living room where they look awesome.  They would also look great in an office, in a library, or in a child's room.  They'd even look great in a craft room (although the thickness of the globes does lower the amount of light given off by the lamps).
Posted by Unknown at 1:26 AM