Well, I have to admit - I have more on my plate than I can really keep up with! 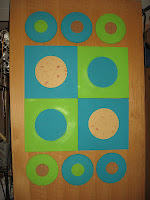 So because I was so busy, I decided to add yet another a new project to my list of to-do's (instead of working on something I needed to do - of course!).  This time I was motivated by some cork tiles and circles that I found in various locations in my basement.  I have been looking for some space for my crafts.  I had a space in the basement, but happily gave it up so my daughter would have a place for the piano she was just given by a family friend.

As a result, I have ended up in the only place left in the house - the garage. So to that end, I've also had to create my work space out of things we already have, and a few items found at garage sales because we simply don't have the spare money to create a "professional" workspace.    A dining room table and buffet were items I've been storing in the garage so were easy to incorporate into my workspace.  I did put up some book shelves on one wall and I did find 2 bookcases at garage sales (for less that $20 each!) and am using them to organize the things I'm making to sell on Etsy.

Back to my project (which involves my workspace).   I've been wanting to find a place for a memo board.  I've had several ideas including one I saw that was to use an old metal bed-spring as a place to clip things to with clothespins.  Then I found the cork which I'd been storing in the basement (I'd used it a long time ago in other memo projects so it was a little damaged).


There are 12 inch squares cork squares and smaller 6 inch cork circles.   I decided to paint them with my favorite paint (acrylic) in my current favorite colors (aqua and lime).  I decided to keep it simple but make it fun by using circles as the motif.

So I used the circle corks as a quick mask and I also used a fruit-cup container as a mask (I use those little fruit cups for tons of different things...they are especially great as a container for water to use when painting).


Here is the result:

I think it turned out REALLY cute!!  And so simple!   The hardest part was mounting them to the back of the bookcase.  I used my glue gun and hot-glued them on.  And that worked ok (although some of the corks were ripped up in the back and didn't stick as well as I'd like).  I will point out that you should probably check your used cork tiles to see if they are warped BEFORE you try gluing them on to another surface (I ended up having to glue and re-glue one of my squares... and it looks a bit funny, but I didn't really care).

Overall, I love the look.. fun, hip and colorful.