I rather like the fact that I try and re-purpose old things.  So in that spirit (and the fact that we had just come back from camping and hadn't gone shopping), I came up with a new meal for my family - using leftovers and the few remaining items in my refrigerator.  From the camping trip, I had leftover whole wheat hot dog buns, about 3/4 cup of sausage, and about a cup or so of shredded cheddar cheese.  I also had some eggs and some milk that needed to be used before it expired. 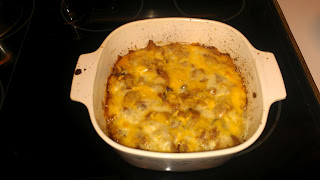 The buns were more than a little stale - although NOT moldy (I don't use moldy food - unless it's cheese!).  I usually just let the bread air-dry and then store it in a air-tight jar to use when I need bread crumbs... but this time, I decided to play around a bit (I've been watching WAY too much Food Network!). 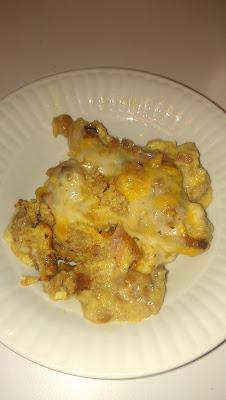 I tore up the buns into little pieces and put them into a corning-ware baking dish.  Then I threw in left-over sausage, a hand-full of shredded cheddar cheese, and then was going to pour eggs (well-mixed) over the top, but discovered I only had a couple of eggs.  Instead, I mixed my eggs with about the same amount of milk (in retrospect, I probably should have used less milk than eggs).

Then I sprinkled in a dash of Lawry's Seasoning Salt, and some chopped, dried onion and then poured the egg/milk mixture onto the buns and sausage in the baking dish.  I gently stirred the mixture (making sure all the bun pieces were soaked with the egg mixture), tossed another small handful of shredded cheese on top and threw it in the oven to bake at 350.  It baked for about 30 minutes (by that time, the cheese had become melted and bubbly, and the egg mixture had somewhat solidified (that's when I realized I had probably used too much milk, but it was still a nice soft, fluffy texture).

It was quite tasty and my husband and daughter encouraged me to make it again (and I will the next time I have an over-abundance of old, stale bread!).

Who knew whole wheat hot dog buns could be that tasty!