I'll admit it, I love Halloween!  I decorate my mantle with garlands of leaves in fall colors and then tuck in black-painted vines and leaves (so that after Halloween, I can remove the black items and ta-da... it's already decorated for Thanksgiving!).  I also have a variety of Halloween-themed items that I place about the main entry and living room.  And some years if I've got a lot of time, I take out our collection of Styrofoam bones and tombstones and decorate the front yard. 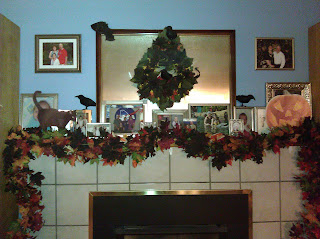 One of my favorite things to do is to carve pumpkins!  It serves 2 purposes: 1- we get fun decorations, and 2- we get yummy pumpkin seeds.    In the past, I tried carving the pumpkins several weeks ahead of Halloween.  I'm not sure if it's the weather, the house-heat, or the fact that we live in the PNW, but the pumpkins usually start molding pretty quickly.   Moldy pumpkins, while probably are a great addition to the Halloween-themed decorations - are pretty gross to deal with.  I have occasionally made a pumpkin totem pole and it looks pretty cool!  BUT with molding pumpkins, it doesn't last long and it's pretty disappointing to go outside and see the totem pole caved in and falling apart.

So what to do about the molding pumpkins?  One year, I tried washing them before and after carving.  Still molded.  The next year I tried washing them with a bleach-water solution.  Still molded.  Perhaps a solution of salt or boric acid would work?  I don't know.. but I no longer worry about it.  We get our pumpkins closer to Halloween and carve them a few days before Halloween... then if they mold (or if the deer eat them - yes it's happened!), then oh well. 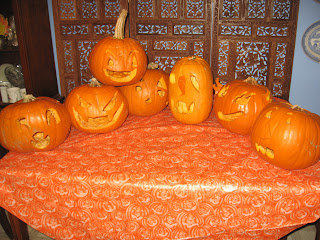 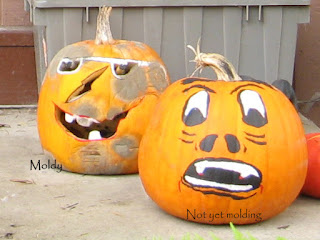 BUT I still like decorating with pumpkins.  The next best thing is those wonderful foam pumpkins which are carve-able.  They are really neat, but have been too expensive for my poor wallet.  A few years ago, I discovered a bunch of cheap, plastic pumpkins at the local Goodwill.  Hmmm.... they are lightweight, don't rot (or decompose in any way), cheap, and there are tons of them available in thrift shops (and probably garbage cans after Halloween!). 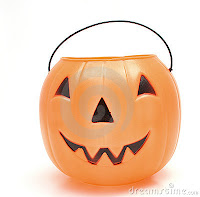 I thought about them for a while and decided that I would try and make them work for me.   I didn't care for their original color (they look too fake/ugly). So I decided to paint them.  I took the 3 pumpkins and painted them dark green (almost black).  Then using their original faces as guides, I repainted new faces with glow-in-the-dark orange.  I cut an opening in the same place in the bottom of each pumpkin so I could place a stick or fencepost through all of them (which is important to keep a totem pole of pumpkins standing upright on windy nights!). And then, because they didn't come with tops, I took a piece of plastic from a recycled butter-tub-lid and cut it into a circle slightly larger than the opening of the smallest/top pumpkin and then glued fake leaves onto it, covered that circle completely.  Some years I've glued the lid onto the top of the pumpkin, and other years I've simply placed a chunk of rock on top to keep the wind from blowing it off.   One other thing I did was outline the edges of all the details with pin-pricks (poking a thumbtack through multiple times)... this allows more light  to come through the facial details at night when I put a tea-light in them. 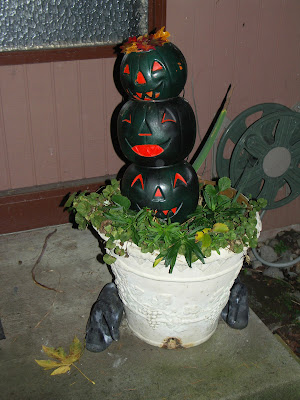 Because there are only 3 pumpkins and they are plastic, they stand up nicely to the wind and rain and you can safely stick a  candle inside (I like battery-operated tealights myself).   The last 2 years, I've even done away with the stick or fencepost and simply place a heavy rock in the bottom of each pumpkin to help it stay in place.  If you wanted more than 3 pumpkins in your totem pole, you would probably need a pole or stick running through all the pumpkins to keep them upright. I chose to do only 3 because I don't have a lot of room for storage, and those plastic pumpkins do require a lot of storage space!  I place my mini-totem in a planter on my porch which gives it enough height to see it clearly when you walk up to our doorstep - day or night (although it appears that after 3 or 4 years of use, I need to do a bit of touch-up painting).  I think the totem pole is really cute, and a great project for anyone to do!

I hope this little project inspires you to think of new and interesting ways to use your Halloween items that might have been thrown out!
Happy Halloween!
Becky @ Re-CoveredTreasures.Com