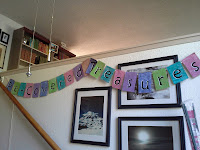 My list of items needed for a show booth is slowly getting smaller.  I had printed a sign/banner via Vistaprint.com.  And it's a nice-looking sign - perfect for hanging in the back of my booth.  But I wanted something eye-catching - and something that goes with any of my accent colors.

I have been looking at Pinterest for a long time now and have fallen in love with burlap (OK, I already loved burlap - but it's becoming somewhat of an obsession!).   I've been doing a lot of searching for craft booth, flea market booth, and farmer's market booth ideas, and it seems like all of the ones I like the best have some kind of banner (most often burlap) hanging from them.

So I decided to create my own.  First I had to get burlap.  I had some left-over from a re-upholstery job I did on an old chair, but that wasn't enough.  Then I happened to find some at my local Goodwill (I just LOVE them!).  PERFECT.  Now what kind of banner??

I originally thought I'd do triangles and use buttons to make my letters.  I like that idea but didn't want to spend forever cutting out perfect triangles.  Plus my business name was too long and would use up too many buttons (not to mention that the time to sew on all those buttons would be ridiculous!).

I ended up choosing to just cut rectangles.  I wanted a somewhat rustic look so I tried to keep the rectangles roughly the same size.

Then I decided I wanted to paint the rectangles so that they matched my various accent-color-schemes.  I decided to paint them with a denim-blue, a pink, an aqua, a lavender, and a chartreuse green.  I needed about 20 rectangles plus a few extras just in case.  So I figured 5 or 6 of each color would give me enough to paint my company name on them.

Painting took longer than I originally planned on!  The burlap soaked up more paint than I thought it would.  I used acrylic paints and started with my base color, which I then added white to and washed over the base coat.  I then added another layer of watered-down white to the top to give each color a really nice texture and look.

I then laid out my squares in the pattern that I wanted my letters to be applied to.  This was important because I hadn't realized until this moment, that my rectangles were too big!!  The resulting banner would have been about 16 feet long (which is way too big for a 10 x 10 foot canopy!).   Thankfully, cutting off the plain, unpainted edges managed to get the banner-size down to a manageable length (of about 10 feet).

Once I had the rectangles cut down to an appropriate size, I then painted letters onto each of the rectangles and added a white highlight to the lettering to make the letters really pop.  I also pulled off a few of the burlap threads from all of the edges to give them a bit more texture and rustic feel.

I think the resulting sign looks really nice and will help make my white canopy really stand out.  Where is my canopy?? Well, I haven't found one yet - or rather, I haven't found one on sale yet (I'm hoping to find a nice, used one for a good price - before I am forced to buy new from Costco).

I'm getting excited to see my booth put together!  I now have a banner, accent curtains, aprons, and display items all in matching colors.  My next step will probably be to create the table coverings. hmmmm.... more sewing?? perhaps I'll be able to create something without a lot of sewing!  Check back soon to find out what I ended up doing (it will be a surprise to me as well)!