I've been toying for months with the idea of having a booth at a craft show, flea market, or farmer's market.  To that end, I've been developing ideas in my head as well as on Pinterest (I have to admit I'm becoming a bit of a Pinterest addict - it's an AWESOME place to find pictures!!). I find it so inspiring!  Here's the first step that I've taken to make my dream of having a flea market booth come true:

The first thing I've worked on is display items for my booth.  I've had the idea of spray-painting my lamps and display items for quite while now, but once I saw this picture from modpodgerocksblog.com I became motivated to try it out for real!

First I decided to try spray-painting some Ikea candle-holders I found at a garage sale (The red was the original color).  I liked how they turned out so I moved on to my other display items.

I have been collecting metal boxes of various types.  Old library-card type files, recipe-type boxes, cash boxes, etc.... there are a lot of these neat boxes available for really great prices at thrift stores and garage sales.  I thought the various boxes would make great display items - either as lifts (for other items to stand on top of), or as display/holders in which smaller items like postcards or jewelry could be displayed.  Of course, all the boxes are ugly grey or brown when I purchased them.  Plus, I have a bunch of brass-type lamps that I've been using to display my lampshades. Their shapes are nice, but their looks seem a bit dated.

I decided to create a color-scheme for my booth.  One that would be bright and cheery, but also could be played around with a bit to keep it fresh.    I choose blues (soft blues, denim-ish blues, and my favorite - periwinkle blues), bright pinks, whites (can't go wrong with white),  and aqua/teals.  (I also want a chartreuse/celadon color but I'm still working on that).   I don't plan on mixing a lot of the colors - but instead sticking with a calmer background color scheme and then choosing an accent color to use for each show or market that I attend.

My idea is to have the white tent, with curtains of which-ever accent color I decide I want to use that day.  Then I would use the accessories for that color-choice.   I'd have whites, creams, and burlap-browns as the background colors - and probably dark denim blues too.  Then pops of the accent color.  I've found sheer curtains to hang from the corners of my canopy (at a thrift store of course - for great prices!).  And I've been spray-painting like crazy!


So here's how some of my display items turned out.  I LOVE them! 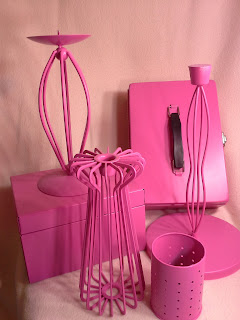 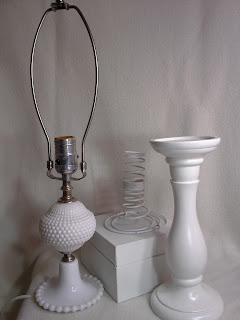 I choose bright pink because it's such a strong pop of color - plus it's fun. 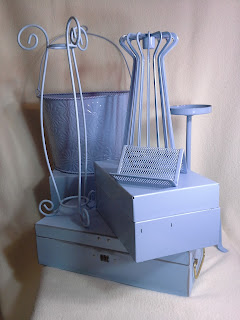 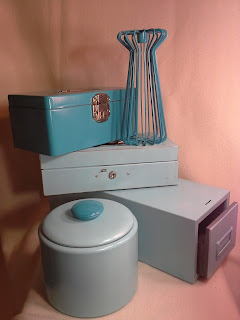 And aqua/teals, they go perfect with the 1950's items of similar color!

Now that these are done, I am on to the next step(s) in creating an eye-catching booth... so stay tuned for more updates!

Utility Aprons (to use instead of a cash-box)